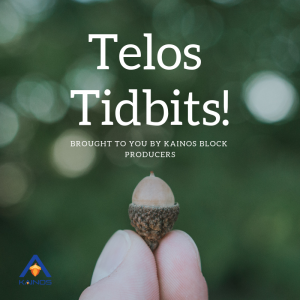 There were so many happenings this week!

The Launch of Telos Planet

For all the community members asking “where are the dapps?” We now have an answer, Telos Planet! This new app has been described as “Minecraft for Blockchain”- @InfinityBlocJerry or “3d Minecraft version of Pixel Master”- @RUDEMUDCRAB. The very basic gist of the game is mining blocks. You can mine blocks, find different rare materials, and create the landscape.

In a podcast given about the first planet launched (EOS Planet), the developer talks about the ingenuity of this world being built on Blockchain. It is essentially a metaverse, not on any one computer and can’t be taken down. Your browser basically acts as an interpreter to the world as you mine blocks and place them in the world.

You pay a small fee for each block you mine to cover RAM costs, however, it does not cost to place the block in the world. If someone decides they want the block you’ve placed they can then come purchase it, however, they will pay a higher price than you did, but this price is paid to you. If you want to return that same block to where you had it you must purchase it for an even higher price. So you could essentially see some turf wars happening, that could easily turn into making money as the block becomes more valuable.

Right now the world is constrained to what is open, however, as there is more interest and building the world will auto-generate and could go on forever. The developers are also working on the crafting aspect of the game with hidden recipes for melding blocks together to make them even more valuable.

They would also like to develop a type of block explorer that lets you see the history of the world and create different timelapse scenarios to see the world built. When asked what they see as the future of Telos Planet developer @EosDevOne said

“ I see telos planet as the first step to persistent online virtual worlds… It’s a big departure from virtual worlds running on some server online. This truly is a different plane of existence, that can’t be stopped, or controlled. Think of this with VR, and technology 5–10 years more advanced.”

We are so excited to continue exploring this world, watching it be built, and to see what new community members this will bring to Telos.

Go have fun at Telos Planet and stay tuned for another Telos Tidbit next week!